Whether you've already taken or are still considering a DNA test to determine your kinship with someone or to trace your lineage, knowing how to work with the results you receive is crucial! Receiving the test results is one thing, understanding them and using them as a research tool are totally different things. Join us at the CCGS meeting on Tuesday, May 15, for a presentation by Seema Kenney on DNA Results as a Research Option.
﻿﻿﻿﻿﻿
Seema Kenney is an experienced software instructor and a professional genealogist. Her known roots are deep in New England as well as England, Germany, and Sweden. She has a certificate in Genealogical Research from Boston University; completed the ProGen study program; and she is an active member and officer of several genealogical societies.

Our CCGS meeting will be held at the Brewster Ladies' Library, Rte. 6A, Brewster, on Tuesday, May 15, 2018 at 10 a.m. Please consider arriving early for socializing and refreshments beginning at 9:30.

Received at the Library

While we probably are all experienced in using Ancestry.com, the cover story in Internet genealogy (Feb./March 2018) shares ways to find hidden treasures.  To cite just one example, were you aware that Ancestry contains lots of databases that don't include personal names (think the Sears Roebuck catalogs, or postcards)?  Ten interesting examples of databases that aren't traditional genealogy data are listed.  In "At your service: the generous genealogist" Sue Lisk recommends ways to help others that will expand your skills and horizons, such as mentoring other family historians, transcribing or indexing records, documenting family stories or grave sites.  "Do you have lost Irish ancestors?" centers around researching emigration from Cobh, the deepwater port for Cork City, from which about half of Ireland's emigrants departed.  George Morgan (co-founder of the Genealogy Guys Podcast) is interviewed about his work with the Florida History and Genealogy Library to digitize items from their collections.  "Digital Library on American Slavery" focuses on but goes beyond North Carolina, and includes the Trans-Atlantic Slave Trade Database.  Check out the National Archives Virtual Genealogy Fair, an online conference featuring NARA records since 1913, just one of the internet resources mentioned in "Net Notes" in this issue.

In Your genealogy today (March/April 2018) "Hints from Houdini" offers 5 techniques to improve your research that take inspiration from the famous magician: be imaginative, confident, skeptical, resilient, and focus on the women!  Joe Grandinetti makes some great finds in Ireland tracing his mother's lineage in "Return to your sources."  In "Electricity and family history" we are reminded that something we take so much for granted today was a common feature of our ancestors' lives only with the 20th century.  Using North Carolina as a case study, Diane Richards discusses the intricacies and eccentricities of state records, and how history affects them. Another article covers researching Scots-Irish ancestors in 18th-century Virginia..
at April 20, 2018 No comments:

Received at the Library

The featured article in Internet genealogy (Oct./Nov.2017) "Always an apprentice!" gives tips for improving your family history research: use maps, historical apps like WhatWasThere and HistoryPin, and find local histories and other books that give the flavor of your ancestors' lives.  Two articles elucidate slave records in Britain (including British Caribbean colonies) and in the American South ("Slave Insurance Records").  "Reaching the end of the roll" reviews the end of the LDS microfilm project, and covers workarounds while we await the completion of digitization in 2020.  YMCA WW1 Service Cards are an interesting new resource added to FamilySearch, giving information on over 27,000 civilian volunteers who aided the war effort.  FindMyPast has added a collection of Catholic parish records ultimately expected to contain 100 million records.  The 2017 release of genealogy software package Heredis is reviewed.

The Dec./Jan 2018 issue of Internet genealogy explores several less traveled avenues for your research.  The lead article treats lesser known manuscript and archival holdings in "Online finding aids reveal genealogical gems."  The author suggests that ledgers are particularly useful, but names a host of other records that can reveal genealogy facts, such as petitions, bank records, benevolent society records, and more, and she suggests ways to find them.  (A friend of mine works on transcribing records in Provincetown, and found the Pharmacy ledger particularly fascinating.) Another article treats military periodicals, which are scattered across the internet -- search using the unit's name/number, and don't forget state newspaper archives.  If you like to think about the big picture of our genealogy enterprise, you'll enjoy "The global village in 21st century genealogy," which looks at the theories of Marshall McLuhan in light of the internet.  As always, there are software and website reviews: the PRONI historical map viewer covers Northern Ireland; ProStamm is a new genealogy software; Jambios is a new platform for telling stories online in book format.
at April 19, 2018 No comments:

All non-profits are dependent on their volunteers in order to function. Cape Cod Genealogical Society is appreciative of all the assist... 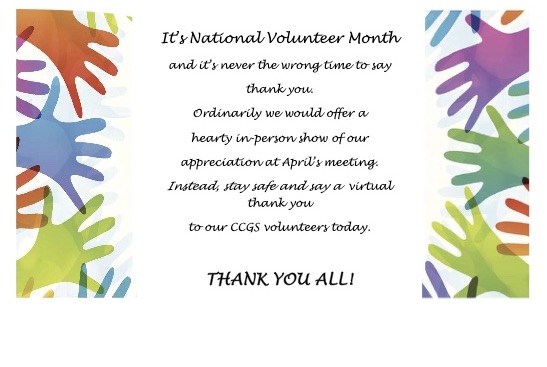